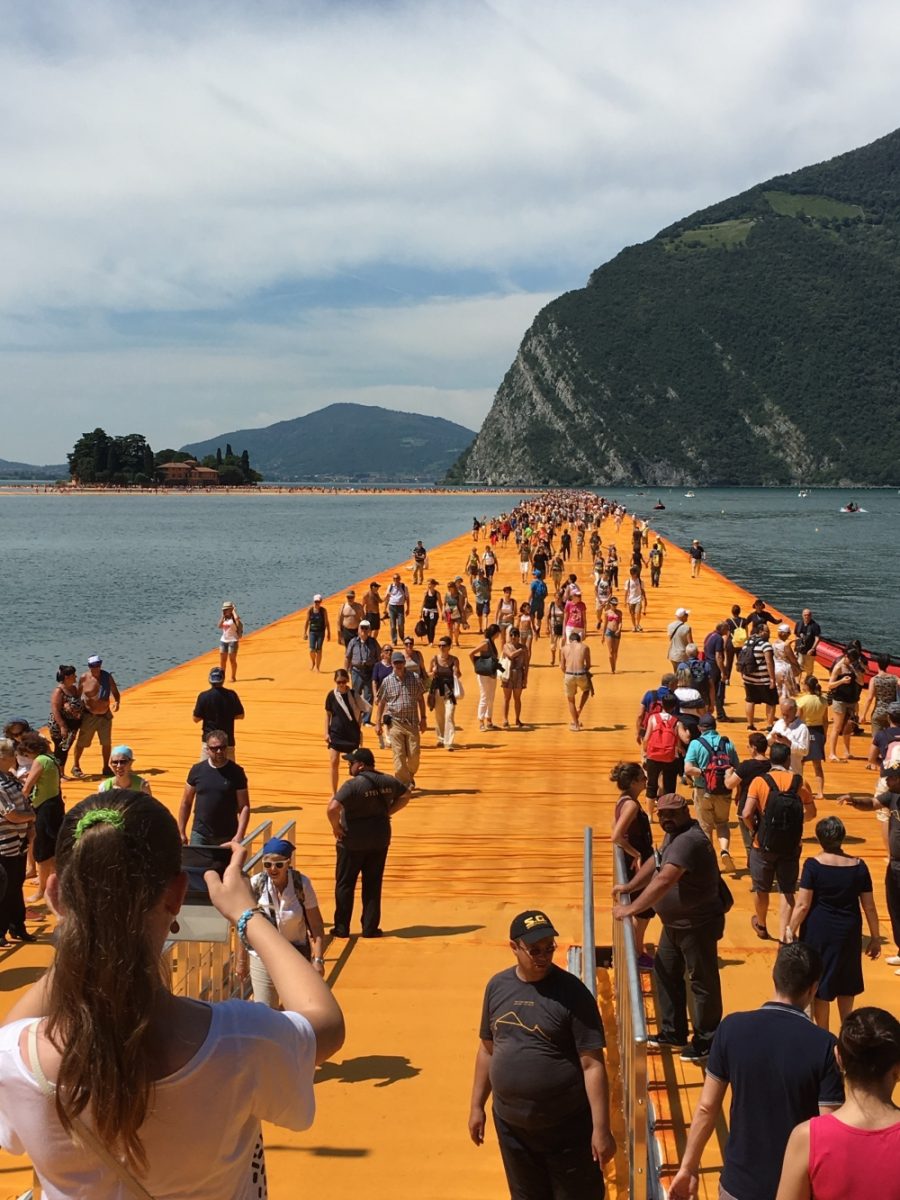 A walk along Christo’s installation, The Floating Piers, was the most magical of Italian strolls.

The Italian Lakes are a popular holiday destination with Como, Garda and Maggiore taking centre stage. But waiting in the wings is Lake Iseo, which is frequently described as the “secret” lake. The installation of a Christo artwork could change that forever. 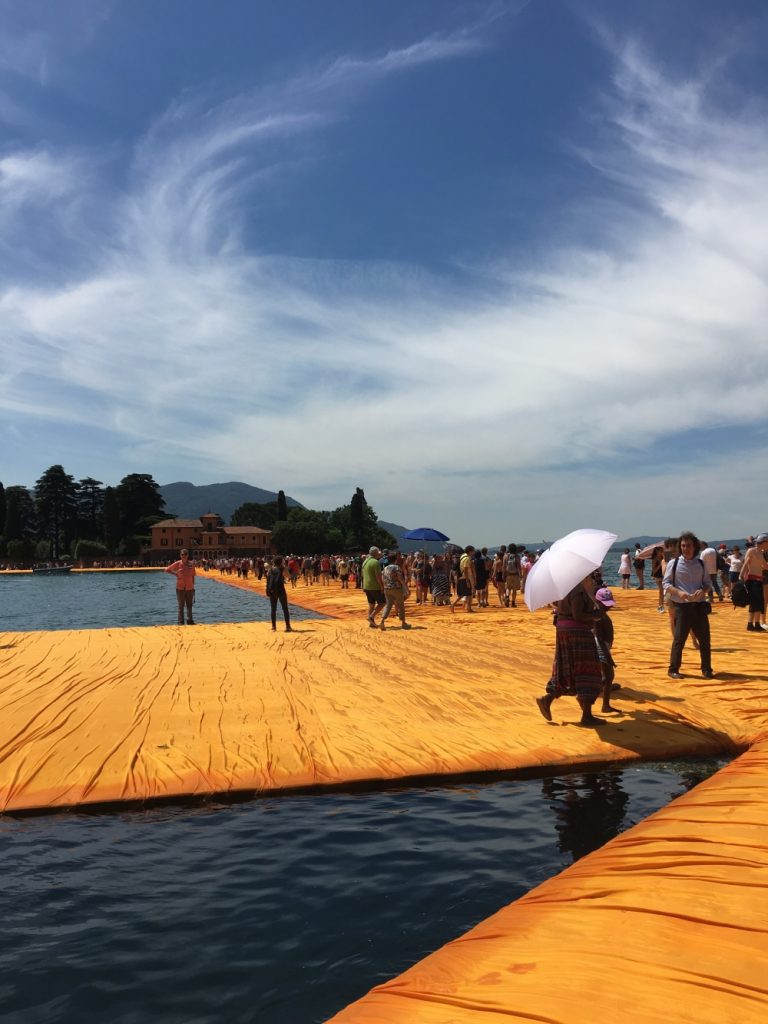 Intersection at the Floating Piers

Lake Iseo may be smaller than its higher profile neighbours but it does boast Europe’s largest lake island, Montisola. A heavily wooded mount in the centre of the lake, the island produces a surprising number of gastronomic specialities including olive oil, salami and the Slow Food presidium of sardine essicate, dried lake fish. (Locanda al Lago in Località Carzano dries its own and serves them in a number of dishes.)

Apart from food, Montisola also has a worldwide reputation for making nets, but not only for fishing. Its sports nets are sought after because “we double knot them so that they don’t slip,” explains a local.

Visitors are usually more interested in the fact that Lake Iseo borders the sparkling wine producing area of Franciacorta, aka Italy’s best fizz. So it was inevitable that there would be a lot of Franciacorta (the name refers to the area and method of production as well as the final product) used to toast and celebrate Christo’s Floating Piers.

And why not? The combination of beautiful landscape, a breathtaking work of art and the joys of a passeggiata – the leisurely walk taken for the purpose of socialising (especially in the evening) – is worth a top quality “cin cin”.

Christo covered his floating piers in fabric which meant they changed colour from a deep orange (when wet early in the morning) to vivid yellow as the sun dried them. He also wanted people to walk on them barefoot which many of us did.

I was taken by boat from the small, charming town of Iseo on the lake, around the island of Loreto to Montisola from where we walked across the lake to, and then around the private island owned by the Beretta family. The piers are wide at this point so lots of people stop to sit, relax or even lay out a picnic. We carried on back to Montisola, followed the crowds around part of the island and then walked over the water to Sulzano on the mainland where a Franciacorta bar beckoned with a chilled bottle of Satén and a view of thousands of happy walkers on the piers. 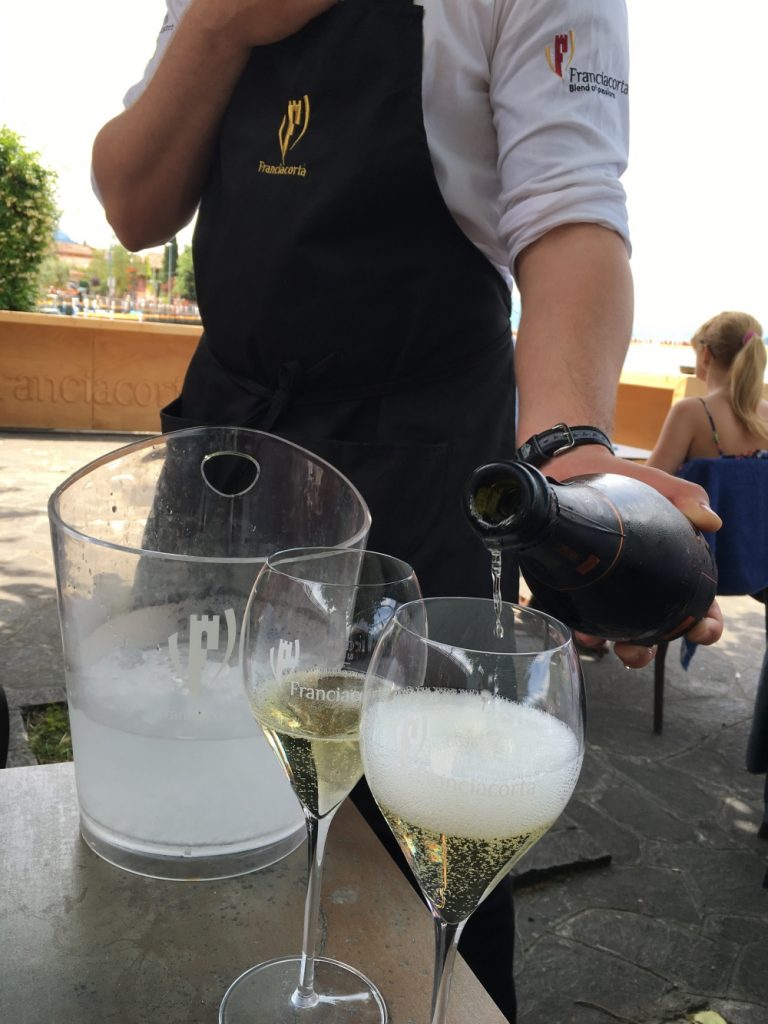 A glass of Italy’s best fizz at the Franciacorta Bar 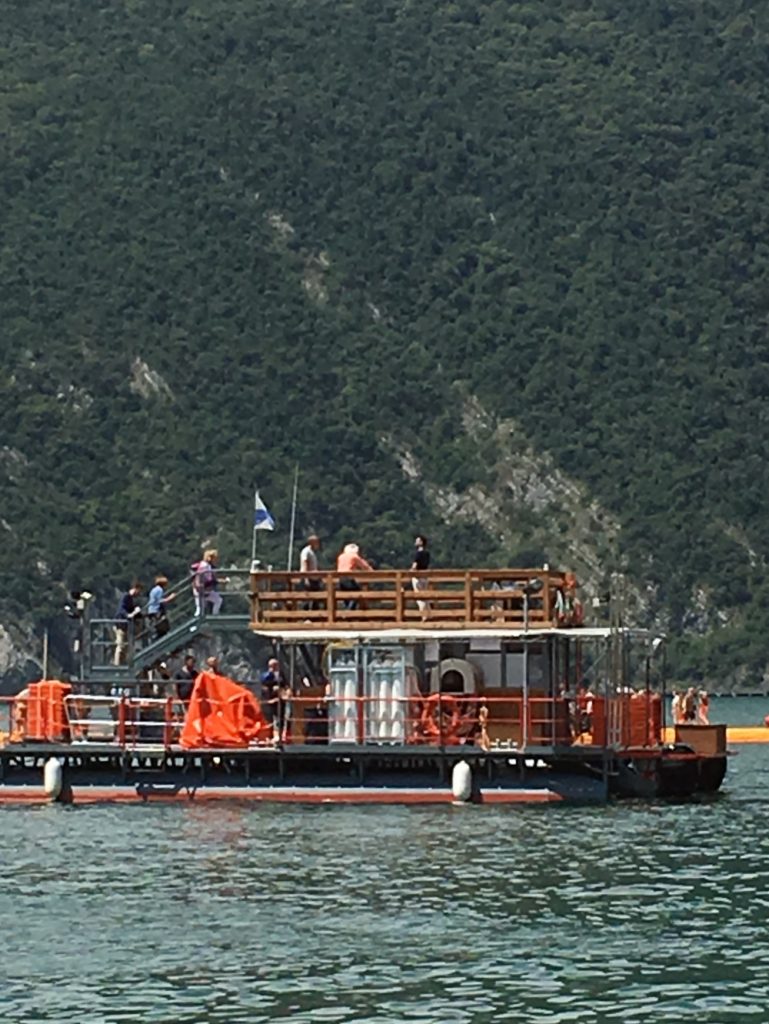 Christo at his Floating Piers

The artist was out on the lake every day, and when he was spotted, walkers burst into spontaneous applause, calling his name and cheering. It was a spine-tingling expression of appreciation.

I love the Italian tradition of passeggiata. Here, as in a conventional, land-based evening promenade, people moved at different speeds and stopped to chat with people they knew, or had just met. The gentle swaying of the brightly coloured walkways installed across the lake was relaxing, smile-inducing and encouraged strangers to interact whether in brief exchanges or taking photos of groups of friends so that nobody was left out.

I’ve enjoyed many a passeggiata over the years. This was the best by far.

I was a guest of the Conzorzio Franciacorta.